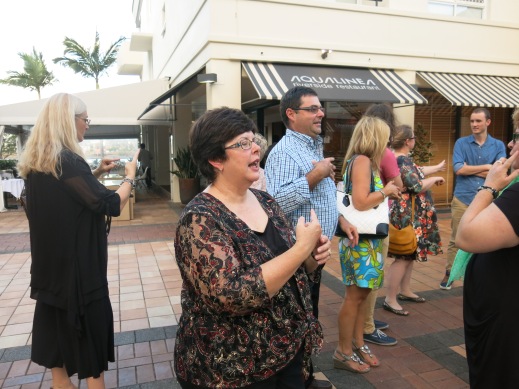 Deaf people at a mainstream restaurant

Until the mid 1990’s, deaf communities in Australia were centred on their deaf clubs, based at the Deaf Societies. It was a well-organised, active, vibrant community. And then everything changed.

Education became increasingly mainstreamed; deaf students now have less contact with each other and the wider deaf community.

The focus on community fell out of favour with the Deaf Societies and capitalist-style business models became king. The Deaf Society of NSW closed its unprofitable nursing home and hostel, sold its Stanmore site and leased rooms in an office building in Parramatta. It became more ‘professional’, hived off its community centre and deaf club was no more.

For a while, a small group of deaf people tried to establish deaf pub at Lidcombe Bowling Club. But deaf people didn’t feel connected to it. The soul of the deaf community was absent, its spirit crushed.

The Stanmore site is now part of Newington College. The back of the site can still be glimpsed as you trundle past on the train, but instead of the wide gap with a flash of white and a dash of red, the space where the bowling green once basked in the sun is now filled with a dull brown building. Gone is the romance of a more genteel and spacious era.

The WA Deaf Society hosts it in a small hall with a bar in their premises in a block of business suites where you can’t just walk in after hours, someone has to let you in.

South Australia’s deaf community recently experienced traumatic change when the historic Deaf Society building at 262 South Terrace, Adelaide was sold against their wishes. Early in 2014 Townsend House, which now operates the SA Deaf Society under the name DeafCan:Do at Welland, provided the community with separate club premises at Modbury North for a token rent of $100 per year. Whether the community can recreate a vibrant deaf club in their new premises remains to be seen.

Modern Deaf Societies are run as businesses providing services funded by governments, philanthropic grants and, increasingly, fees for service. They still fundraise but it is unclear how they spend these funds.

In the absence of a regular deaf club, deaf seniors still meet at the Deaf Society or in mainstream community halls and young deaf people meet in mainstream pubs and clubs. These two age groups seldom interact.

In the old style deaf clubs, young and old mingled and learned from each other. In my twenties I had a wonderful deaf colleague and mentor in the legendary Dorothy Shaw, then in her sixties.

Today I meet young deaf people who know little about their community’s elders and seem to assume that deaf people at the pub are the deaf community.

Like Irish, Greek, Italian people, regardless of how included they are in mainstream society, deaf people would still benefit greatly from the richness and self-expansion that is found in clubs for ‘people like us’.

We still see our deaf friends face to face in our own social groups and at occasional community events, there are still various sports and interest groups and Deaf Australia is still achieving progress for deaf people.

But without a deaf club to provide a focus and a regular meeting place, much of the old cohesiveness has been lost.

Community events are less frequent, less well attended; groups and organisations are harder to locate and less well supported; everyone is too busy living a more mainstream life and, like the mainstream community, is less able or inclined to volunteer.

Today, although there has been progress, most of our advocacy issues remain the same.

When information was shared face to face in Auslan at the deaf club everyone could understand and participate in discussions regardless of their English fluency or education level. Debates and disagreements happened face to face within the deaf community, policies and strategies were nutted out privately and we presented a mostly united face to the world.

In the modern era of mostly English-based social media, disagreements, one-sided ‘debates’ and misinformation have become public for the non-deaf, unaware of the underlying issues and nuances, to scrutinise and misconstrue. Publicly the deaf community now looks less cohesive than privately it is.

Intimidated by modern cyber bullying and disenfranchised by English text-based discussions on social media, the majority of deaf people are less able to have their say than they were twenty years ago when I regularly walked up the street and around the corner to the deaf club on Friday nights.

The Auslan signs for ‘deaf club’ and ‘Deaf Society’ remain the same. Although there are some ‘deaf club’ nights in mainstream pubs, nothing has emerged to replace the old concept of the deaf club.

We need to find a way to create a modern version of the deaf club, without giving up the gains we have made in access and inclusion.  We need to do this in a way that is not dependent on Deaf Societies.

Deaf Societies are still important organisations for the deaf community, but the world has changed. Although some seem to want to hang onto it, the old welfare model, where one organisation did everything for deaf people, has been on the way out since the 1980s. We need new ways of thinking that take lessons from the past and move the community forwards, not back.

How would you describe the deaf community now? How is it different to how it was in the past?